You may have heard of Jaws for the NES...

You may have seen Jaws for the NES...

You may have even PLAYED Jaws for the NES...

But you don't know everything about...

Jaws for the NES!

LJN: Where the Investigation Stands Now

Back in August, I thought I made a break in the case when I found a Newsday article from 1991 about Paul Samulski, who at the time was working for Acclaim. According to the article, he had served as creative director at LJN and "was responsible for the concept, design and execution of all LJN products." What luck! Maybe he would know something about the video games.

So I e-mailed Samulski and within hours received a reply. He said that he was in charge of LJN's video games. He also said he'd be glad to answer my questions and shared an interesting tidbit with me that I hope he doesn't mind me sharing with you: He was one of only two people that went from LJN to Acclaim, the other being LJN President Jack Friedman's driver, who then became the president of Acclaim's driver. It would seem Acclaim gutted the company. The LJN brand and "extra slots" alone were apparently enough to justify the cost of the acquisition.

I proceeded to send Mr. Samulski some questions, but never received another reply. I don't know if it's something I said, or he's just busy. Had I been able to interview him, it could have been interesting. That same Newsday article pointed out that he produced and co-created animated TV series with LJN toy tie-ins like Thundercats and Bionic Six. He was also a consultant on the television show Video Power, presumably only during the original format that centered around cartoons featuring Acclaim game characters (The Power Team). He was also Vice President of Creative and Product Development at Acclaim, dealing with properties like Mortal Kombat and NBA Jam. He later worked in the same capacity at NewKidCo, another publisher of licensed games, this time aimed at young children.

Since Samulski was pretty much my last hope for answers, we are now at a dead end unless something leaks out of Japan. I suppose I could try finding that driver...

Michael Knox, co-founder of developer Park Place Productions, passed away last week after a battle with cancer. This is according to Sega-16's Ken Horowitz, who posted the news on the Sega-16 Forums yesterday.

After attending San Diego State University, Knox went into the US Navy, where he worked as a Data Systems Technician, repairing and maintaining mainframes and other electronic systems aboard the USS Jouette CG-29 and the USS Horne CG-30. It was during this time he began designing and developing computer software.

From there, Knox worked for West Coast Consultants (a company that developed CAD software), Cinemaware, and Pacific Dataworks International. He then co-founded Park Place Productions in 1989 with $3,000 and a credit card. The company would eventually become the largest independent game development company in North America. For his accomplishments with Park Place, Knox received Inc. Magazine's Entrepreneur of the Year Award in 1993.

Park Place developed many sports games during its lifespan including the first console Madden football game, the first Joe Montana football game for the Genesis, and Electronic Arts' first NHL hockey game. For more information and stories about those, be sure to read Sega-16's extensive interview with Mr. Knox.

A perusal of Knox's MySpace profile reveals that he had been dealing with cancer for some time. There are pictures from last year of him "recovering" and even a blog post about his illness. It is sad he did not survive, but he will be remembered. Some of the sports games he and Park Place were involved with were certainly a factor in the success of the Sega Genesis in the US, and the Madden and NHL franchises continue to be top-sellers to this day.

Santaclaus is Coming to Town

Not many games have come to us from the folks at Santaclaus, but they did do a few notable titles for their former bosses. Of those, I've only (as far I can remember) played the Saturn version of the Neo Geo fighting game Galaxy Fight. Looks great, plays great, but I couldn't tell you how it stacks up to the other versions. I like the music, too, but Santaclaus likely had nothing to do with that.

Santaclaus' most famous game is probably Astra Superstars for Sega's ST-V arcade system and the Saturn. The Saturn version of this colorful fighter is apparently one of the more expensive titles for that system. There's even a section of the Santaclaus website devoted to Astra, along with a couple of small Windows/Mac games centered around certain characters - a card game that doesn't appear to be available for download and a paper doll-esque "game" where you get to dress 10-year-old Rouge in various outfits (yay?).

In recent years, Santaclaus has been making mobile, Flash, and even Shockwave games like Sandra Witch, which features an underdressed titular character fending off giant balls.

An old version of the Santaclaus website's company profile has a list of games the team (or just Okasaka-san?) did at Sunsoft before Santaclaus was started:

Some old NES players might remember RoboWarrior (aka Bomber King in Japan), the quasi-Bomberman offshoot. You know, the one developed by Hudson? Or was it? It actually looks like it was at least partially developed by Aicom or Exa Planning, the possible Aicom predecessor. Given that Exa Planning's Angel Kids (AC) has a 1988 copyright and Bomber King came out in Japan in 1987, I guess I'll have to go with Exa Planning for now. Look at the staff:

Outsourcing to non-Japanese Asian countries "back in the day" wasn't just limited to obscure PC Engine games. It happened to obscure Game Gear games, too! Well, at least one. Enter the Korean-developed GP Rider, based on the Sega arcade game of the same name (though the GG version seems more like Super Hang-On).

Just who is this Lee Sanghun? A Google search I did while writing this post revealed that Lee also programmed and directed the unlicensed Korean SMS fighting game Sangokushi III (三國志III; 삼국지3). Hmmm...

New information about SIMS was revealed in a recent Hardcore Gaming 101 feature about localization. The following is from an interview with former Working Designs head Victor Ireland included with the feature:

JS: Please tell me a little about this "sister sonic" rumour I keep reading about regarding the US release. Is it true Sega wanted to remake the game as a Sonic spin-off?

VI: I believe it is true because that is what I was told by the head of the Consumer Soft division at SEGA of Japan. We were working on Vay at the time, and the company that was doing that title (SIMS, an acronym for the last names of the company partners) was part-owned by him. He was in the building, and we got along quite well, so he decided to show me some games in-progress. Popful Mail had just been rejected as Sister Sonic at that point, according to him. He offered it to us. That deal led directly to Dragon Force and Iron Storm.

The man Ireland is talking about is Mamoru Shigeta (重田守). After having worked at Irem, Shigeta was named the president of Sanritsu Denki in 1989. He was the original president of SIMS and was the director of consumer software at Sega Enterprises. Going by what Ireland is saying, one of the Ss in SIMS must stand for "Shigeta." All this doesn't quite jive with what I had gleamed from SIT Developer Table:

I am born as Sanritsu Electric side and a co-funding company with Sega in June, 1991.

Of course, this is an online translation, but I had assumed it was basically saying that SIMS was some sort of joint venture between Sanritsu and Sega. The site doesn't mention anything about four partners or co-owners. SIT Developer Table also says SIMS stands for "Soft development Innovation Multi Success." 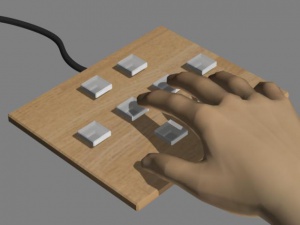 I'm not sure what's going to happen with my informative interview with Beyond Interactive CEO Hitoshi Akashi. I haven't heard from him in about two months now. In lieu of said interview, I bring you this mockup he sent me of the debugging interface used while developing Famicom/NES Family Trainer/Power Pad/Family Fun Fitness games at Sonata (or SoNaTa, which may or may not be the proper way of writing the name). Instead of running on a Family Trainer and tiring yourself out while working, you just let your fingers do the walking. An actual Family Trainer was used during the final stage of development. Sonata was the resulting company of a 1987 merger between TRY (pronounced alphabetically) Corporation and Communicate, Inc. that later became Human. Yes, that Human. Sonata (and likely its predecessor TRY) was responsible for most of the Power Pad games.

The ConfirmEdit extension has been re-installed. As before, you will be asked to solve a simple math problem if you are not logged in and try to edit, create an account, etc. I also noticed that some tabs were not appearing for users who are not logged in. This has been fixed.