Our goal is to have the Mikito Ichikawa interview completely finished and ready to go by the end of the month. In the meantime, please do enjoy this picture of Ichikawa-san working at the Mindware office. 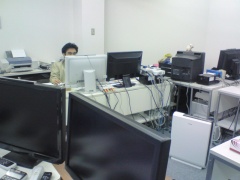 To any Americans out there: Today is Election Day across the country. If you're registered and the polls are still open when you read this, go out and vote! Even if you're in a state that's not up for grabs in the presidential race, assume nothing. Vote! Also, there are other things on the ballot besides the presidential stuff.

This is Not the Game Developer Research You're Looking For

So if you ended up here because of the Electric Playground site, you are in the wrong place. Though we have a column on sister site GameSetWatch, GDRI is not affiliated with Game Developer Research. In fact, we predate it by a year. Sorry for the inconvenience.

Another One Bites the Dust

Thanks to the mysterious stranger who posted those Serizawa Nobuo no Birdie Try / Mecarobot Golf (SFC/SNES) credits, the clincher in deciding that unknown company GDRI-006 was Advance Communication.

Let's all celebrate by watching a Japanese commercial for one of the games Advance Communication developed, Jekyll Hakase no Houma ga Toki / Dr. Jekyll and Mr. Hyde (FC/NES)...

All this time I thought anonymous editing was disabled because of the skin we're using, but it was actually because of some other setting. I have fixed this setting, so now anyone can edit anything on GDRI that has not been locked so that only sysops (i.e., me) can edit it.

REMEMBER: "Anonymous" editing is not completely anonymous, so no funny business! Your IP address will be recorded and displayed publically in the edit history. You will also have to answer a simple math problem.

Did some Activision marketing person stumble upon GDRI? From a press release for Little League World Series Baseball 2008 (WII/DS):

"Now Production is a premiere videogame developer founded in 1986 and based in Japan. It has developed games for many major publishers, including Namco, Konami and Activision, working on games such as Katamari Damacy and Dance Dance Revolution and Little League World Series 2008. In recent years, Nowpro has started creating original, independent titles and is also involved with developing mobile software and online games."

Call me wacky, but that seems a bit like our description of Now Production...

I'm not sure how long I'll be able to keep the column going. I don't think we have enough material that is broad enough and doesn't get into specific games or "clearing up credit-related wackiness," as editor Simon Carless put it.

The video is one of many on this YouTube channel. Some girl "owns" the channel, but a friend is apparently the one who posted all these old game promo videos. Where did they come from!? [UPDATE: Turns out these were taken from the Internet Archive.] If you dig around, you'll find some more unreleased stuff (like Future Zone for the Super NES). Did you know there was going to be a Genesis version of the Home Improvement game?

Back to GG Road Rash II, it and Kawasaki were developed by Teque London. There is very little shared staff between them, though (you can find the credits to RRII in the Kawasaki ROM). I tried to find someone who worked on either game that I could e-mail, but to no avail.

And be sure to check out Mindware's new WiiWare game MaBoShi: The Three Shape Arcade, released this week in Europe and Australia. Don't know when or if it's coming out in the US or Japan.