From Game Developer Research Institute
(Redirected from Matt Harmon (In Their Words))
Jump to: navigation, search 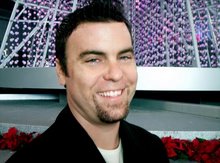