The amount of stuff we Westerners know about Korean games could fill a space the size of a headlight on a Kia. But that's all changing thanks to the ongoing research of one "Derboo," who's writing about gaming in South Korea for Hardcore Gaming 101. Because of said research, more has been learned about gamemaker Sanghun Lee (or Lee Sanghun; see right), who has been discussed on this blog before.

Let's start from the beginning...

Among the early Korean game developers was a team of teenagers called New Age, which started making games for MSX computers in 1987. Sangyoun Lee and Kyuhwan Lee were among the team's members. They would go on to found Phantagram, best known for the Kingdom Under Fire series and Ninety-Nine Nights. Sanghun was on the team, too, of course. He is now president of Expotato, but let's not jump ahead of ourselves.

Instead, let's take a look at the games with which Sanghun was involved...

This one is like Bubble Bobble mixed with Knightmare II: The Maze of Galious​. Clear the screen of enemies, pick up items, and check your inventory as you progress.

Not much to say about this one except this is certainly not the most impressive-looking or sounding or playing version of Double Dragon. An interesting curiosity, though. Features music from Irem's Vigilante for some reason.

If you liked Konami's Knightmare for the MSX, you'll be right at home here.

For whatever reason, Sega brought in Sanghun to work on this. His name can be seen on billboards in-game ("LEE SH") and in the ROM. The game is more like Super Hang-On than the arcade game from which its name is taken. 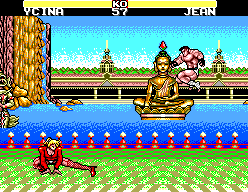 Similar to Samgukji but looks more like Street Fighter II. Features a character named "Sanghun" and a Nazi cyborg.

More or less based on Sango Fighter. 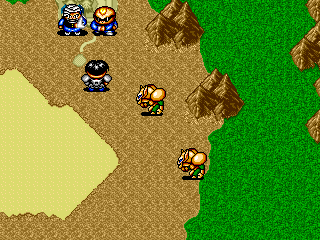 Sanghun directed this RPG originally conceived for the Mega Drive. Only the DOS version was released.

As mentioned before, Sanghun is now president of Expotato. This company's big series appears to be Come on Baby, an unusual set of games featuring babies racing and slapping each other.

For further information on these games, companies, and so much more on Korean gaming history, check out "Derboo"'s feature on Hardcore Gaming 101.