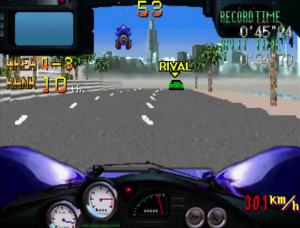 The first game released for Sega's System 32 arcade hardware, Rad Mobile was impressive when it came out back in 1991. Three years would pass before there was a home system powerful enough to contain it. Enter Gale Racer for the Saturn.

The object, like the arcade game, is to drive from Los Angeles to New York and claw your way to first place. But does this Saturn version perfectly replicate the arcade experience? Not quite. 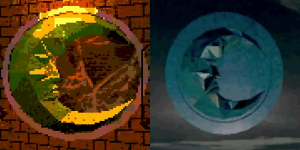 The moon from Sega CD Mansion of Hidden Souls (left) appears as an emblem in Gale Racer (right). Both games were developed by System Sacom.

While Rad Mobile moves seamlessly from locale to locale ala Out Run, Gale Racer pauses between stages to show you your time and load the next section. This really changes — some might even say ruins — the flow of the game.

Other vehicles on the road are made of polygons instead of sprites, which looks a little janky. The draw distance is lower, and the frame rate is not as smooth. The whole game seems a little buggy and a little glitchy.

Development of Gale Racer was handed off to System Sacom, which was known mostly for adventure games. Main programmer Hiroshi Ogino wrote an e-book about his time at the company, and he devoted an entire chapter to this game. Not surprisingly, porting it was quite difficult; the arcade cabinet and image/stage data were made available, but not the source code.

Sega of America was at one time planning a US version, as it was mentioned in a press release announcing the Saturn's early launch. GameFan reported that it would "be completely repaired to mimic the arcade game perfectly." When asked about it, Ogino seemed to have no recollection. [1]