Hey, it's a 3D platformer that came out before Super Mario 64 and before analog control was standard on consoles. That's pretty cool, right? Right?

In Floating Runner, you lead either adorable bounty hunter Lay or adorable priestess Cress on a journey to find seven crystals to save Crystal Land. Adorable enemies will try to stop you, but you can stop them with your adorable weapons.

As adorable as everything is, there are problems, and you can't blame them all on age. Some make the game unnecessarily frustrating to play at times and could have been avoided. Let's run down the list:

1) Your default weapon shoots in an arc. There are other weapons, but you have to find them scattered throughout the different worlds.
2) The enemies are way too fidgety.
3) Stage layouts can be disorienting. The lack of camera controls doesn't help. (You can only switch between two angles.)
4) Controls are slippery, making jumping on platforms tricky.
5) There aren't too many health potions around. (Yet the first stage has five!) 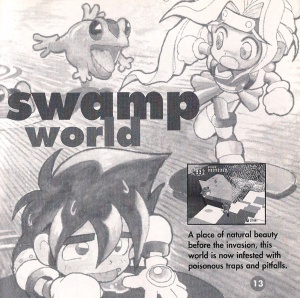 The inside of the US manual uses the original Japanese artwork, unlike the cover.

Better weapons and less ponderous stage layouts would have gone a long way in making a better game, but it's not all bad. The frame rate is brisk. The music is pleasant (though sometimes repetitive), as is the mix of flat-shaded and texture-mapped polygons. It's still a charming game.

For many years, it was a mystery who developed this pioneer software. There are no ending credits. Xing is the only Japanese company name that appears in-game or on the game, but they were just a publisher.

Modern technology allows us to look inside the data and find an unused T&E Soft copyright notice and list of credits. It's not clear if they were supposed to be displayed on-screen. It's bizarre that a company like T&E Soft would make a game like this and leave their name off.

Hydlide creator Tokihiro Naito talked very briefly about Floating Runner during his interview in The Untold History of Japanese Game Developers Volume 2. He didn't know anything about it, unfortunately; he was about to leave T&E Soft and had little interest in their in-house games. He said it may have been developed by the Osaka branch. A check of the names suggests that is the case. (T&E Soft's Osaka branch [formerly Xtalsoft] is where games like Red Alarm were also made.)

D4 Enterprise, the company behind the Project EGG service, acquired the rights to T&E Soft's back catalog in 2019. Floating Runner can be found in their list of properties.