If you've been paying attention to the Recent Changes, you've noticed I've been working on the Atlus entry. During some online research this weekend, I noticed a man named Minoru Esaki (江崎稔) worked on an unreleased Famicom game called Dota-kun no Bouken Roman.

Dota-kun no Bouken Roman ("Dota's Romantic Adventure") is some sort of side-scrolling action game that was to be published under Imagineer's WaveJack Jr. label. It was based on an MSX game by SystemSoft. You can see ads and screenshots here. The point is, I asked Esaki if it was developed by Atlus (because I suspected it was). He said it was produced by Atlus, but it was programmed outside the company. That seems to have been a common practice for Atlus, especially in the early days.

I had some follow-up questions, but Esaki didn't answer most of them. I was probably getting a bit too obscure. He's worked on a wide of variety of games for a wide variety of companies over the years. I'll transcribe his list for you:

The other unreleased game on the list, Metal Crusher Ardyss (or Ardythe or Ardis or Ardith or whatever), is a menu-based adventure. You can see screenshots here, here, and here.

Esaki now runs a game development company called Magitec, which was started in 1994. In the past, the company mostly did support work on games like Battle Bakraid (AC) and was responsible for the Neo Geo Pocket version of Cotton. It now produces mobile games including this one where you pick fleas out of a cat or dog.

Minoru Esaki, you are a GDRI Unsung Hero! 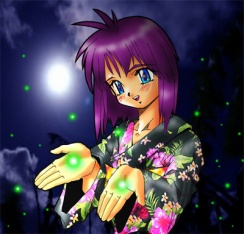 Comments on Blog:"Esaki to Me" or "There's Magitec in the Air"