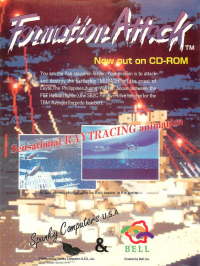 Someday I need to write up a post about Wing Arms for the Saturn (or maybe this is enough). It's a 3D flight game featuring WWII-era aircraft where you shoot down other planes and ships and such. It was by a little-known developer called Bell that had some former T&E Soft members on staff.

Programmer Tetsuya Yamamoto revealed in The Untold History of Japanese Game Developers: Volume 2 that Wing Arms is essentially an update of a PC (Japanese DOS/V) game Bell made called Musashi. While Wing Arms has different missions, the sole mission of Musashi is to sink a giant battleship. There's very little information about Musashi, but I did find a page with some screenshots.

A few months later, I noticed another Bell programmer had a game called Formation Attack on his Facebook profile. I figured this was some other game. Then by chance I found an ad for it in Computer Gaming World Issue 121. It looks to be the US version of Musashi.

There's no proof this ever came out, and I've never even heard of Spunky Computers U.S.A. before. It's an odd name and an odd logo, and I can find no record of such a company existing.

Hmmm...I suppose this post had no point to it, but what else what do you have to do?